The English hallmark system was born in 1300, when King Edward I ordered that every gold or silver item should be tested for fineness by the officers of the Goldsmiths’ Guild in  London before it could be offered for sale, and that a mark should be stamped on the piece as a guarantee that this test (or ‘assay’) had been passed.   The design adopted was the ‘Leopard’s Head’ as seen below.   In 1363 an additional provision was made that each piece should bear a mark identifying the maker — at first a symbol, but later (from about 1600) two or occasionally more letters.

In 1478 a third mark was added;  a letter of the alphabet to indicate the year in which the piece was assayed   The letters used were twenty in number, running from A to U with J omitted, and the design was changed at the end of each 20-year cycle.   As a result of slight irregularities during the late seventeenth century, the eleventh cycle started in 1716 rather than 1718, and this pattern continued without further change until the system was reorganized in the 1970s.

By this time the original Leopard’s Head had lost its identity as a guarantee of fine and had come to be regarded as a specific identifier for the London office (other towns were by now privileged to carry out assays and had their own town marks).   Accordingly, in 1544 the goldsmiths introduced a new mark to denote the purity of the metal;  this was the Lion Passant, a heraldic lion walking to the left.   It showed that the silver was 92.5% pure (sterling standard).

This completes the list of marks commonly found on watches.   In theory, items made between 1784 and 1890 should additionally bear a portrait of the reigning monarch, testifying that a tax on silver in force between those years had been paid;  but after a few years this was generally omitted on small items such as watch-cases.

NOTE.   Supposedly there was a variation from one series to the next in the shape of the shield or frame which surrounds the letter, as shown in traditional tables of hallmarks.   However, these particularities were not observed in small items, where a neutral type of shield, varying between the forms shown in the first and third alphabets here, was generally used.   Not until the 1876-1895 series was the official shield-shape adhered to in watch-case marks. 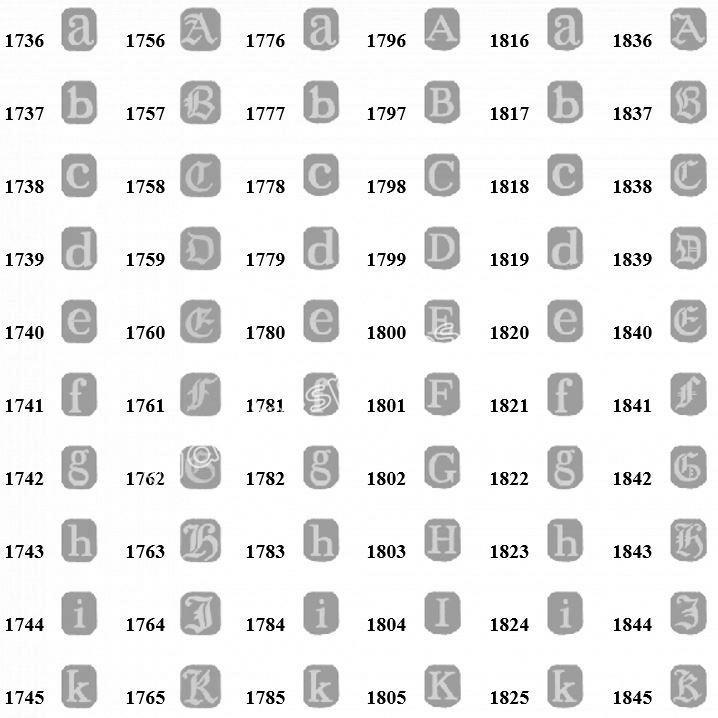 These are very similar, as can be seen above.   One cannot rely on the hallmark alone to date a watch marked with one of these alphabets;  you also need to know something of developments in the design of watches themselves. Here are a few clues
Arcaded dial   Unlikely to be later than about 1780
Lever escapement   Very rare before 1815
Engine-turned case   Rare before 1830
Arabic chapter-ring   Mostly 1790-1810
Flat (rather than convex) dial  After 1800
Subsidiary seconds dial   Very rare before 1800
Note also the change in design of the leopard’s head (1821) and the use of the king’s head in profile for a few years from 1784.

Share this ArticleLike this article? Email it to a friend!
Email sent!